The process of scaling an annotation object goes as follows:

For instance, if we were to adopt Meters and Millimeters respectively for the Model Space and the Paper Space, and create a viewport with annotation objects drawn in a 1:25 scale, we’d get:

while a drawing set in imperial units, with the Model Space in Feet would lead to the following:

An arguably faster and more intuitive alternative approach makes use of the Annotative Scale drop down menu and the Edit Scale forms: 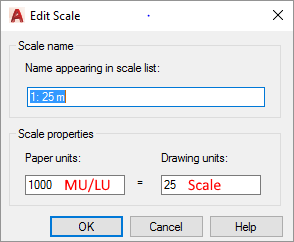 Here, the MU/LU ratio goes into the Paper units field, while the Drawing units fields must be filled with the Scale parameter. That establishes a direct relationship between the model and the paper space units:

Annotative entities as shown for the SECTION block in the following video.